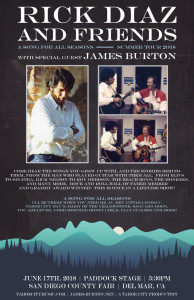 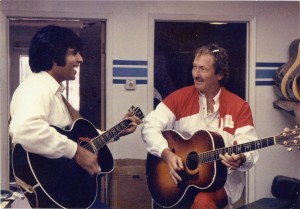 Rick Diaz/ Singer, Songwriter, Actor, Recording Artist, will be in concert this Father’s Day June 17th at 3:30 pm on the Paddock Stage, at the San Diego County Fair at the Del Mar Fairgrounds. Rick’s Special Guest will be legendary guitarist James Burton. Burton, is a Grammy winner, and member of the Rock n’ Roll Hall of Fame. Burton, first came into prominence as Rick Nelson’s guitarist, on the TV series the Adventures of Ozzie and Harriet and played on Rick’s early hits from the late 50’s and early 60’s. A member of the famed LA Wrecking Crew he became Elvis’s Presley’s lead guitarist and band leader from ’69 to ’77. From Sinatra, John Denver, The Beach Boys, Herb Alpert, Glen Campbell, to Norah Jones and Brad Paisley he’s played with them all.Still active to this day, James has become the most recorded guitarist in the history of popular music. 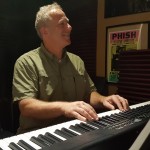 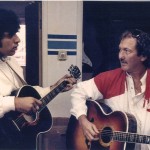 A San Diego native(born in Chula Vista) got his first break appearing at the Harrah’s Tahoe Hotel in Lake Tahoe, NV. A consummate entertainer, he has worked with Glen Campbell, Carl Jackson, Clint Black, and James Burton to name a few. His up tempo mix of Pop, Country, Gospel, Folk, and Rock, have given him a universal sound and across the board appeal to all ages. Rick recently had a Christmas hit with,I’m Gonna Shake The Decorations Right Off Your Christmas Treelast year. His new CD,A Song For All Seasons, is due out later this year. The lead single I’ll Be There When You Need Me will be featured in the feature film “The Long Adventure Home”which Rick will star in. Saguaro Moon and You Are Loved, co -written by Burton and Diaz appear on the CD along with Hey Little Lindsay, Fallin For You, and Tahoe City Days.Rick will open the featuring cuts from his new album, and classic covers that have influenced his style. James portion of the show will cover the hits he’s played on including an Elvis medley, a special tribute to Glen Campbell, songs that Burton and Diaz have written together. James will tell stories about the artists that seguey into the songs.

Backed by an nine- piece stellar group of musicians and singers from San Diego led by Jon Hasz, Ethan Brown, JR Gurnsey, Joel Tuttle, Mark Lamsan, V.J. Brion, Anita Branch, JazzmineFarol, and Malcom Jones. This is a once in a lifetime show, that you won’t want to miss!Burton has been a major forcein Rick’s life, and influenced his unique sound. Watch these two friends come together for an afternoon of memorable music. Sing it Rick and Play it James! You can follow Rick at tahoecitymusic.com and James atjames-burton.net. For press info and interviews contact the James Burton Foundation at (318) 424-5000 jamesburtonmusic@aol.com, Rick Diaz c/o tahoecityproductions@gmail.com and (858) 245-4263 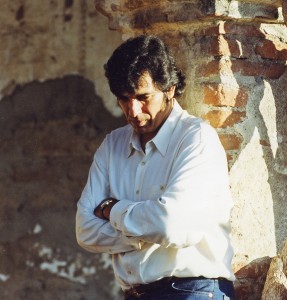 A portion of all merchandise sold at the show will go to benefit the James Burton Foundation and Alzheimer’s in memory of Glen Campbell.

View all posts by admin
← Merry Christmas From Tahoe!